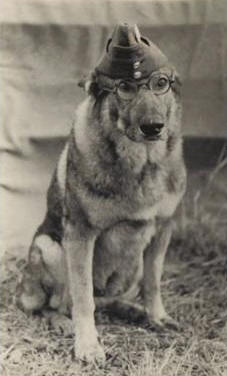 At the start of 2005 the British Royal Air Force Police had been working with dogs for 60 years forming a very special and successful relationship. Chances are, if you told anyone you were in the RAF Police they would invariably want to know all about your dog, assuming that every member of the branch is issued with one on appointment; such is their notoriety.

In 1942, at the height of World War II, Lieutenant Colonel Baldwin formed the Ministry of Aircraft Production Guard Dog School (MAPGDS) at Woodfold near Gloucester, turning out professionally trained RAF dog handlers which in turn released hundreds of men for war duties who had previously been employed as guards. In 1944 the MAPGDS was absorbed by the RAF Police and re-titled as the RAF Police Dog Training School.

In 1949, the RAF Police Dog Demonstration Team appeared for the first time at the Royal Tournament in London and became an instant public success. In 1957 the first annual RAF Police Dog Championship Trials were held at Netheravon. In 1969 the Dog Demonstration Team covered 8,000 miles around the USA and Canada giving 65 public performances in 23 cities and became a favourite at every venue. The RAF began training dogs to detect illicit drugs in 1970 and later trained dogs to detect firearms and explosives. Soon after, HM Customs & Excise began using RAF Police drug detection dogs against smugglers. In 1991, in line with defence reviews, RAF Police dog training merged with the Royal Army Veterinary Corps at Melton Mowbray and the Defence Animal Centre was formed.

To some, the life of a RAF Police dog handler may seem glamorous, but in reality the job demands a lot. The men and women who volunteer, do so because they love the challenge of working with dogs even though a considerable amount of their time is given up to the training and welfare of their charges. In 60 years, the Royal Air Force Police have earned a glowing reputation both at home and abroad for their high standard of training dog teams and for their highly professional use of dogs for patrol duties as well as in specialist roles. RAF Police dogs on loan to HM Customs & Excise have since 1971 recovered illicit drugs with a street value of many millions of pounds and represent the worst nightmare scenario for smugglers.

This is the first time that the story of RAF Police dogs has been told. This unique book will be of interest to anyone interested in military history; RAF history; police-work; the training and use of dogs for police and security operations, or anyone who merely likes dogs. The author (Stephen R Davies) served with the RAF Police for 25 years and was frequently responsible for the overall management of dog sections under his control. Furthermore, since 1994 he has been researching the complex history of the Royal Air Force Police since its formation on the 1st April 1918. His first book, Fiat Justitia – A History of the Royal Air Force Police, was published in April 1997.

Halt or I’ll Release my Dog – RAF Police Dogs on Patrol, is being published by Woodfield Publishing Limited, Bognor Regis, West Sussex PO21 5EL, United Kingdom. Tel: 01243 821234   Fax: 01243 821757. This book will be available in November 2005 and further information about ordering it may be obtained by checking the publishers’ website: www.woodfieldpublishing.com or by e-mailing them: info@woodfieldpublishing.com